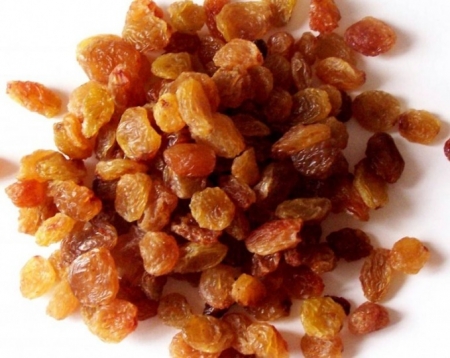 Sultanas are dried seedless grapes of Vitis Vinifera L. variety. The large, yellow-green grapes that are dried into these raisins are particularly flavorful and soft. Sultanas are mainly used in the traditional cakes, breads and biscuits.

The timing of commencement of harvesting is a compromise between the better yields obtained from fruit of higher sugar content and the increased later in the season. This dilemma has resulted in the practice of beginning harvest on a more or less fixed date after mid-August.

The grapes are hand-picked into the container (“dip tins” or “buckets like plastic baskets”). The most commonly used containers are made of sheet steel and plastic baskets have perforated bottoms and sides to allow free flow of dipping lye through the fruit during dipping.

Early in season, Sultanas may be dried by simply placing them out in the direct sun, without any pre-drying treatment. In this way “naturals” similar to American Thompson Seedless raisins are produced. They are dark reddish brown, with bluish tinge due to the bloom, and have a distinctive flavor.

However, in Turkey pre-drying treatments that hasten drying are used. Sultanas are dipped in an alkaline lye known to growers as dipping lye.

Drying times are reduced from about 3-4 weeks for untreated Sultanas to 7-10 days for treated Sultanas dried on a bed under average conditions. Such fast drying leads to rapid rise in sugar concentration, which inhibits the action of the enzyme (polyphenol oxidase) responsible for darkening in untreated fruit. The enzyme is localized in the skin of the berry where drying begins. The natural golden-yellow color of fresh sultanas is thus preserved in treated grapes dried under good conditions. However, when rain or high humidity interrupts fast drying, conditions may become suitable for the darkening reaction to proceed, and darker fruit is produced.

The grapes are dried into the following types of raisins.

The large, yellow-green grapes that are dried into these raisins are particularly flavorful and soft. Sultanas are most popular in Europe. The fresh Sultana variety grapes is dipped in an alkaline olive oil emulsion and sun-dried for 2-3 weeks.

Made from small black Corinth grapes, currants are seedless and very dark in color. About one-fourth the size of other raisins. Mainly produced in the Greek Islands first grew in the Island of Corinth. Those types are sun-dried without the usage of drying oils.

Large, brown and particularly fruity-tasting, these raisins are made from big, greenish-gold Muscat Grapes. Their type is mechanically dehydrated without the use of drying oils.

(Natural Seedless) The sun-dried Thompson grapes constitute 95% of the Californian raisins crop. The green grapes naturally develop a dark brown color as they dry in the sun, a process that takes from 2-3 weeks, after they have been treated with drying oils.

Like natural seedless raisins, these are also Thompson seedless grapes, but are oven-dried to avoid the darkening effect of sunlight. They are also treated with sulfur dioxide to preserve the light color and mainly mechanically dehydrated.

SULTANAS are mainly used in the traditional cakes, breads and biscuits.

CURRANTS are used for baking hot cross buns and cookings.

DARK RAISINS are most popular for cooking, baking, salads and desserts.

GOLDEN RAISINS used wherever a light colored raisin is desirable. Popular for fruitcakes and confections.

Consumer bags from 50 grs to 4 kgs. in cartons

All the goods supplied are with the certificates of

Grape, common name of an edible fruit in the buckthorn family and of the vines that produce the fruit.

The European Grape has been used as food since prehistoric times. Grape seeds have been found in the remains of lake dwellings of the Bronze Age in Switzerland and Italy and in Tombs of ancient Egypt. Botanists believe that the Caspian Sea region was the original home of the European Grape. Distribution of seeds by birds, wind and water carried the plant westwards to the Asian shores of the Mediterranean. Grape Culture, practiced in Palestine during biblical times, was introduced in the Mediterranean region by seagoing Phoenicians. The Ancient Greeks cultivated grapes and use of the fruit was later adopted by Rome and its colonies.

Turkey has the most suitable climate conditions for vine growing in the world and is the origin of the vine genes. The archaeological findings in Anatolia proved that this culture of vine growing dates back to 3500 BC.

Grape figures, found in different locations of Anatolia points out to the fact that growing grapes has been the part of the Culture for centuries.

In the periods of Hittites, that is 1800-1550 BC, grape growing and wine making was developed and during religious ceremonies there were votive offering to the Gods. Hittites had agricultural laws similar to todays in order to protect the vineyards.

A grape bunch shaped wine container, dating back from 1800-1600 BC, was found in Çorum Alacahöyük, another town in Central Anatolia. Historical coins with grape figures were used in Western Anatolia. Grapes and wine have always played an important social and commercial role in Western Anatolia.

The Romans and the Byzantines were much progressed in the viniculture. In Persia, the Armenians were busy with perfecting world’s first seedless grapes. Experts say that the grapes may have been grown exclusively for ruling Sultans of the day. “Sultanas” means in Turkish “for the Sultan”.

The first raisins were undoubtedly grapes that had dried naturally on the vine, but more than 3000 years ago people were picking grapes and laying them in the sun to dry. A process that has remained virtually unchanged.

Today, most raisins are still sun-dried, though some are dried in ovens.

Raisins have been a precious trade item in the ancient near East as well as in ancient Rome (where two jars of raisins could be exchanged for a slave).

Spanish missionaries brought them to Mexico and California in the 18th century. In the 20th century Australia became an important producer as well.

The European Grape is classified as Vitis Vinifera, the northern fox grapes Vitis Labrusca, the summer grape as Vitis Aestivalis, the riverbank grape as Vitis Riparia and the muscadine grapes as Vitis Rotundifolia.

The dictionary meaning of Raisins is sun-dried grapes without seeds.

Sultanas is the common name for the raisins grown in Turkey, Greece and Iran. However, the quality of Sultanas may be modified by weather conditions, but it is largely dependent on the cultural production differs from year to year due to the weather conditions.

In the Aegean Region of Turkey since the 18th century the major grape production is Sultanas which is a variety of seedless type. It has been a part of Sultan’s diet with its original taste and that is where this type inherited its name.